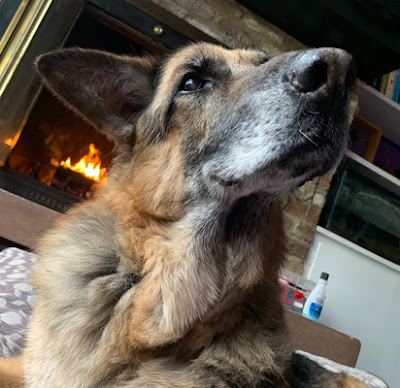 For the past several months Monica and I have had the honor of caring for a dog so sweet, so innocent and so sympathetic that we are better, more humble people for the experience.  Our beloved German Shepherd, Ripp had a condition common to the breed called Degenerative Myelopathy, or DM, which causes loss of nerve reflex at the base of the spine and slowly creeps its way up the spinal column.  There are a number of things that can go wrong while this is happening including organ failure and pneumonia, but paralysis is certain if your dog survives everything else.  The only comfort in the experience is that it is a painless disease.  Insidious, but pain free.

Monica found Ripp by following a group called German Shepherd Rescue & Adoptions back in 2012.  Ripp had just been turned over to them after Animal Control or the Sheriff's office was called to remove him from the premesis in South Carolina where he lived with his first family.  They left him alone in their backyard unloved and unattended.  In their extreme negligence he developed severe ear infections that were never addressed.  GSRA were asking for donations to help pay for the surgery he had to remove the infections.  The infections were so bad that they destroyed both his inner ears.  Doctors had to perform a total ear canal ablation, which means that his inner ear and ear canal were removed from both sides and he was left completely deaf.  We donated to the cause and Monica followed his recovery online hoping all along that we would be lucky enough to bring him into our home.

A Glimpse Inside the Studio

Here at The Poundry we are one hundred percent committed to my satisfaction.  We bend over backwards to make sure that you, loyal fans that you are, have unfettered access to whatever I find interesting enough to allow you to see in its purest, most adulterated form.  I will always strive to represent myself in ways that obscure any of my shortcomings and highlight the faults of others while diminishing their own contributions to my own, inarguably humble greatness.  With that in mind I skillfully manipulated the other carbon based life forms in Confessor into agreeing to release this video from inside the walled fortress of Pershing Hill Sound.  We wanted to prove that we are in fact working on our album without actually giving any of the mystique away.  In case some of you are wondering why you can barely hear Marcus' guitar it's because his cabinets were on the other side of the door you see behind my drums.  If you are wondering why he isn't a prominent figure in the video you should know that the forehead that hovers over my drums and the face under it are both his and he was paid accordingly.  I will continue to work towards "fairness" as long as it works out better for me.  That is my promise to you.

Squeezing Five Into Three: The Riff that Keeps on Giving

A few years ago I was asked to compose a song entirely on drums without any input from a guitarist or bass player.  It was an experiment to see what the drums might inspire in someone writing guitar as Loincloth were trying to wrap things up for what would be our final album, 'Psalms of the Morbid Whore'.  I could appreciate the experimental idea behind it but I felt like our writing process, which was even more nuanced and micro-analyzed then Confessor's, would render most of what I might come up with completely unrecognizable.  Plus, I was well aware that my composing style was in such stark contrast to the composing style of the person asking that it would slow things down at a time when there was mounting pressure to get things ready to go into the studio.  What I offered instead was a chance to explore some basic polyrhythmic exercises that I had wanted to dive into for years.  They say patience is a virtue, and in this particular case waiting for the right time to try to process these exercises into riffs worked out wonderfully.  Three years later I am still chipping away at the tip of this riff iceberg.

No Children or Animals Will Be Harmed During the Recording of this Album... Probably 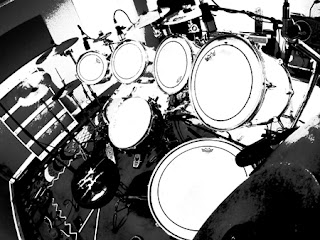 With our new recording in hand I have an opportunity to dig into what few brain cells I have left and try to find the most creative, but simple ways to enhance our songs so that the lifelong fans of our music, as well as the newer audience metal's popularity has cultivated, will be compelled to hit rewind over and over again to figure out what on earth they just heard.  It may seem like an odd goal, but confusing people with positively bewildering music has always been what we as a band, and in a sometimes more obvious way myself as a drummer, have striven for from day one.  It is exactly the opposite approach to writing catchy little earworms.

Read more »
Posted by Steve Shelton at 6:15 PM No comments:

There are many things about writing music and being in a band that I love.  I have always had some sort of creative outlet ever since I was a kid and my head is constantly buzzing with ideas.  I am not sure what I would do without an outlet for those ideas and I hope that I never have to find out.  As a member of a once active, now semi-active band, there are many ways to get feedback from fans.  That feedback is the awesome sauce that makes you feel like you are doing something special.

While shows are a blast during and after each performance, they are only temporary things.  Even if playing out becomes a lifestyle for you, all those shows will eventually fade away to memories.  They make for great stories and the interaction that you have with fans is wonderful to think back upon, but none of that is something you can touch or something you can sit back and enjoy.  It's the studio that gives you an opportunity to lay down your ideas for posterity.  It may not have the instant gratification that interacting with people in a live setting provides, but your recorded music is what can be shared with people later in life.  It is what will endure once the band is no longer taking you from one city to the next.  It's your legacy.

Well hello there, citizens of Earth!  No, your greatest fears have not come true.  I am still alive and Confessor are indeed moving pieces down the path of Total World Dominance as promised in previous posts.  World dominance takes time and careful consideration.  There are refugee camps that have to be put in place and mass transportation systems for the billions of displaced people which must be ready for what will be the greatest exodus in human history.  While our vision of a world brought together by the universal themes found within Confessor's music may seem like a pipe dream to many, we have one thing in our possession that will ensure our success:  incriminating photos of every single one of you.  Resistance will be futile... practice standing at attention and all of the acceptable salutes illustrated in the pamphlet entitled "The Importance of Expressing Fealty to Your New Overlords" which should be in your mailboxes soon.

Metal Moments: Please Get Our Singer Some Pants

There is a kind of romanticism that occurs when fans wonder about the lives of their favorite celebrities.  Whether we think of all of our pop culture heroes as Ferris Bueller, a guy who seemed to have everything fall right into his lap as though the powers that be always smiled upon him, or as James Bond in that all men want to be him and all women want to be with him, we invest a certain amount of faith in the idea that the people who write the music that inspires us, or who star in the films that entertain us have lives that go smoothly all the time. Maybe for some people life is like that.  For underground metal bands, and specifically underground metal drummers I can assure you that is not always the case.

Occasionally weird things happen to aloof, distracted people and sometimes even the most poorly conceived plans go horribly awry. Confessor and Loincloth both have "less than perfect" stories to tell that will hopefully bring a smile, and a healthy dose of realism to those of you who assume that we, your metal providers, lived blessed lives every day.  Some of you may say every one of us lives a blessed life every day, but aren't there levels of blessedness? It would seem that some levels produce rather funny or embarrassing moments that need to be shared with you, the ever faithful and devoted fans.  From time to time I'll retell some of the small adventures that keep us in touch with our own inner Beavis and Butthead.  They will run the gamut from tales of brazen stupidity to those precious moments when everything melts away and you are left to fend off disaster while frozen by the inability to decipher what is going on around you.